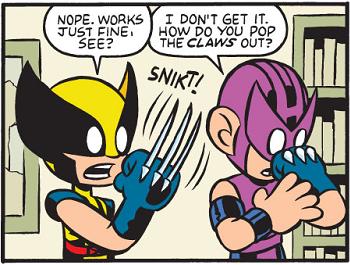 Who knows, Hawkeye. But that's how you'll pop your eyes out.

Generally speaking, this trope used to be common in 1950s and earlier horror comics. Frederic Wertham's infamous Seduction of the Innocent described and probably named the "Injury to the Eye" motif, giving examples from comics of the time.