Drinking Game / Game of Thrones
aka: A Song Of Ice And Fire 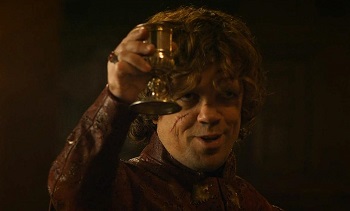 "It's not easy being drunk all the time. Everyone would do it if it were easy!"

When you play the Drinking Game of Thrones, you win, or your liver dies. There is no middle ground:

A few extra challenges if you feel brave:

When your liver is dead it may never die, but rises again harder and stronger.