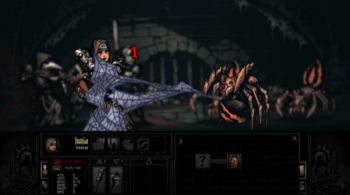 "Overconfidence is a slow, insidious killer."
These nightmarish creatures CAN be felled. They CAN be beaten!
—The Ancestor (notice he never said killing them would be easy)

If there was any doubt that Darkest Dungeon was not Nintendo Hard due to its RNG, let these guys clear that for you.