Lord Quirini of the Ice Chimps: "Do you have any last words... is it... Stacy?
Stacy Mirafuentes: (turning into an eagle) Just three: Monkey... go... boom! (flies away while Quirini takes banana bomb to the face)

In 1991, IBM and Microsoft released a game for MS-DOS and simply titled it Gorillas. The actual file was Gorilla.BAS. Compiled in the Quick-Basic language, it was a very simple game in which players had gorillas on buildings and took turns throwing exploding bananas at each other. Players had to account for angles, velocities, and wind speed to see who could blow up more of the other guy's gorillas before time ran out. Add a few motherboard beeps to the 1812 overture, and the end result was awesome. Except....it wasn't good enough for the think tank Dozerfleet Productions, home of the Gerosha Chronicles.

In 2003, a full 12 years after the game's release, the Dozerfleet founder proposed in an open chat room the possibility for a film based on the Gorillas. That premise was met with mostly scoffing, and the others at TeenChat dismissed the pitch as trolling. The basic idea was proposed yet again in 2004/2005-ish on The Ring Forum at EZBoard; only to be laughed at there as well. Undeterred, the idea sat on a shelf until 2012. It has now been developed almost to the point that a rough draft script can be forged just from the wiki article at DozerfleetWiki 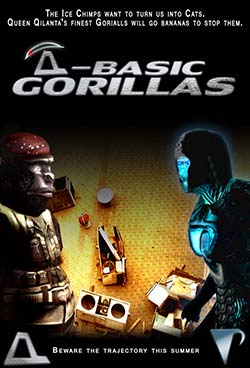 Monkeying around just got a lot more violent.

The initial story revolves around ancient Africans who were sent to protect powerful ancient relics from being captured by evil exiles from Canaanite nations who fled after their homes were destroyed by the Israelites. The Africans failed to protect all the relics, and one of them turned the relic guardians and their enemies into humanoid primates. The different primates splintered off into different factions. The good guys turned into Gorillas, and assembled their own underground kingdom under the rule of the wise Queen Qilanta of the Q-Base Temple. Centuries later, the evil Ice Chimps want to steal the most powerful of the remaining relics - the Omni Transmogrin - so they can turn all of humanity into cats and Take Over the World. The current Topaz Division of Gorillas sent to battle the Ice Chimps in North America is headed by Col. Flix, who was declared a war hero before he even properly enlisted due to his rescue of the Gorilla princess Quilmara.

Meanwhile, young office intern Stacy Mirafuentes receives a package from her uncle. She does not at first realize that he had just bestowed upon her guardianship of the Gorillas' sacred artifact. Her mother, boyfriend, and everyone at her church are soon attacked by the Ice Chimps and turned into cats, as the Chimps battle with her to steal the Omni. They eventually do so, but not before the Gorilla known as Burrpatch stops them from killing Stacy. As the Chimps await the arrival of their leader Lord Quirini to begin the felining of America, Stacy finds herself a reluctant ally to the Q-Basic Gorillas. 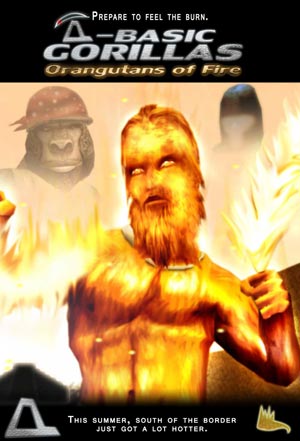 Burn, baby! Burn!
She later discovers that a bug has been placed on her that tracks her movements, and decides to leave the Topaz Q-Base so that she doesn't lead the Chimps right to the Gorillas' home. The Gorillas manage to get the bug off her leg as they are out of town and away from base, but it sends out a distress signal before self-destructing. Several Ice Chimps descend from the sky and attack. Lord Quirini discovers that he needs Stacy to make the Omni function properly, and orders his Chimps to kidnap her. With Col. Flix missing, the Gorillas feel they're down on their luck. But they decide to face the Chimps in an epic showdown of banana bombs and buildings collapsing. Just when all hope seems lost, the missing Col. Flix arrives to even the odds. Together, Stacy and Flix must find a way to defeat Quirini and revert to human everyone the Chimps have turned into cats - even if they have to destroy the Omni to do it!

A sequel was thought up almost immediately after the original's plot description went online. This story takes place just months after the first one. Rob and Stacy are getting married, and Burrpatch is attending the wedding. However, it's revealed that Diamond Division's Col. Veyour has had a Face–Heel Turn and is now working with the Ice Chimps.

Making matters worse, Veyour has friends in low places in Mexico. He also helps the Ice Chimps, reeling from the loss of Lord Quirini as a leader, to unite with the Pyrangutans. The combined forces proceed to threaten a complete takeover of Mexico, and employ drug cartels to assist them. 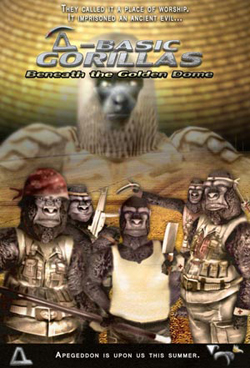 That's actually a bridge in Grand Ledge, not Jerusalem.

After the presidents of both the US and Mexico are infected with a parasite, Col. Flix is forced to take them to the Q-Base in Africa to find a cure. Topaz Headquarters is taken over by the US military, and the remaining Gorillas are forced into hiding in Mexico to regroup while Flix is gone. When Flix returns, he and the Ruby Gorillas must help the Topaz Gorillas turn the tide in Mexico. They finally succeed and killing Lord Incendimore and getting the drug lords to abandon the Pyrangutans, but the Ice Chimps and Veyour decide to regroup and claim the real prize: Jerusalem.

Veyour and company waste little time fleeing the scene, with a few dead Gorillas left behind in Mexico. Flix and company want to give chase, but agree that they need to fix things at their base before they can do anything else.

Beneath the Golden Dome

Picking up a very short while from where the second story left off, the third reveals that both Solomon and Muhammad knew about the Ethermangs. However, they kept hush about it both because they knew that the Ethermangs could not be controlled. Col. Veyour, however, believes he can convince the Ethermangs to work for him, just as he finally got the Ice Chimps to work for him. He proves dead wrong.

The Ethermangs take over the remaining Pyrangutans and Ice Chimps both, and set all their forces on destroying Israel. First, the Ethermang leader Prince Duqat demands that the Pyrangutans destroy all Gorilla bases around the world. This strategy seems successful at first; except enough Gorillas survive the assault to form a ginormous army that descends on the greater area of Israel and Palestine to finish the fight.

It ultimately leads to a nighttime battle inside of a cavernous tomb located underneath the Dome on the Rock mosque, with structural damage to the mosque after the tomb begins collapsing. The Gorillas are forced to make a last stand against Prince Duqat and the Ice Chimps.

The story was deliberately structured to be "in the spirit of" Transformers and Battleship meet Rise of the Planet of the Apes. A fourth installment, Civil War, has been proposed. It would have Col. Flix get a promotion to general, with his colonel spot being replaced by the David Caruso-like Col. Relish.

Tropes present in all three stories:

Tropes unique to the first story:

Tropes unique to the second story:

Tropes unique to the third story: