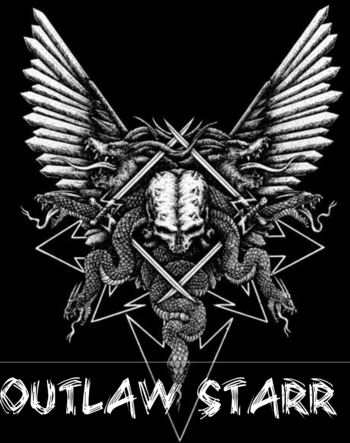 A darker variant of their skull and star sigil
Advertisement:

☯utlaw St★rr (not to be confused with the anime Outlaw Star) is a story about an all black note  a few of the members are actually mixed race, but consider themselves black female band, that's actually more so a coalition of female musicians then just a band. It also tells the story of the politics of the entertainment industry. And the effects of fame and fortune on the band for better or for worse. There's also sub-plots about the band being a Weirdness Magnet. The band is in a alternate version of our world. Which for the most part not that different. For example John Lennon never dies, instead he became dependent on a wheel chair. And black rock music seems to be another separate version of Rock music. This page will be in a In-universe style, as if it was a real band.

☯utlaw St★rr is a band/coalition of musicians made up of black females, whom come from vary diverse geographical backgrounds. Although generally speaking the band for the most part is still a SoCal band. Known for their explosive guitar solos, epic live shows, vocal harmony, genre bending and The Scorpion's powerful dramatic vocals. The seven core members was first formed in 88 with 3 Starr siblings from LA (Tishauna aka Tish born 1977, and her younger twin siblings Tierra and Tiarra born 1979, whom is 2 years her junior). Tish is a self taught guitarist eventually becoming a virtuoso by her early 20's, and Tierra and Tiarra are self taught drummers becoming virtuosos by their late teens. The girls formed a band after their parents bought them their first instruments from a pawn shop. The core sound was a mixture of very flashy guitar driven progressive-like Hard Rock/Heavy Metal, Alternative Metal, meets Soul R&B vocals with heavy overtones of Hip-Hop, Industrial, and Synth. Tish planted seeds of the extended members in her early years as a child model, She formed a clique of other kids she met in the young model industry and persuaded them to play instruments too so they could join her and sisters in the band. While in high school she met 3 of the other core members during the summer of 92 (Brea, Kianna, and Linda). Linda was already a exceptional keyboardist going to a nearby high school of performing arts (she's originally from San Fransisco though). She met Tish at a local talent show. Kianna and Breanna was going to the same gym/dojo as Tish where they discovered they both shared a interest in Martial Arts. They both became closer when they discovered that all three play guitar. Kianna is actually from the U.K. while Brea is from Jamaica but lived all around before settling in LA. Kianna and Brea know each other through their parents. They had a long distance friendship of sorts up until Kianna decided to live in the states and go to school there while her parents worked in London. Tish would eventually ask them to join the band. They needed a bass player and Kianna recommended her friend from Australia whom they met a few months before. She was in LA going to school but planned on moving back to Australia with her father after her freshman year in high school. Once the core 7 was formed they practiced on the weekend and heavily during the summer of their school years. They was at first completely out of sync and completely sloppy. The Starr sisters particularly had a hard time considering they can't read music.

Once they started to gel they started to play small venues and talent shows where they quickly earned a cult following, and a reputation for great live shows that was very sharp. During the spring of their senior year (of 95) in high school they were so good they caught the eye of a young manager who offered her assistance in managing them (at first the the Starr sisters Tish particularly was resistant. wanting everything to be in house). Soon afterwards the Starr sister's aunt (whom had a fledgeling band of her own) got them signed to the label she worked with. At the time the band got a fairly progressive contract that allowed them to have rights to their masters, and their own label (which eventually grew into a major label itself over the next 10 years). The band members still remained in college during the late 90's while maintaining their musical careers.

Surprisingly enough, during Tish's college years she eventually would regroup with her clique from her child hood. And discovered that some actually stuck to becoming musicians. The problem however was that most of them primarily became guitarists. Tish then decided that was gonna be a part of the band's design, and image. She in essence wanted the guitarists to be the Wu-Tang Clan of guitarists, and wanted them to harness their rapping skills in addition to their singing and guitar playing. Over the latter decade of The '90s they would add more, and more extended band members to the coalition eventually choosing to simply consolidate them all into one definitive mega line up. Of course Tish also did this so they wouldn't go form another competing band.

Initially being a guitar driven Hard Rock & Soul band, the sound changed when more members were added to the line up whom had experiences with different styles. Eventually the band's style pretty much became unclassifiable, Genre-Busting and Genre Roulette. The band debated on what genre was going to be the bands sound. After a small debate Tish just shrugged and asked why can't we just do them all?, and the band made that Ascended Fanon. Of course if you must categorize them they're a progressive rock/metal/industrial/synth band with a rapper/soul singer as lead vocalist. With heavy emphasis on song writing, rhythm, melody, turntable breaks, vocal harmony and solos....LOTS of solos. They also double as a production team, helping produce albums for other artists. Themes and topics of the band range from sociopolitical issues regarding gender, race & racism, spirituality, classism, sexual liberation, empowerment, speculative fiction (horror, fantasy, science fiction), Black Female & black/African-American pathos, and just simple violence. The band is also very media savvy, embracing online media and social networks before other artists understood the potential. Despite the occasional performances here, and there, the band went on hiatus starting in the spring of 2012, and the fans freaked out. However, after an admittedly longer than expected hiatus the band started recording again in early 2019.

This band and its music provides examples of: