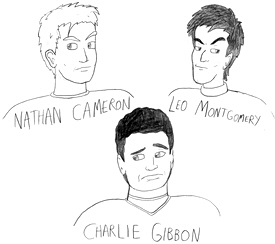 In an alternate 2009, Youtuber Nathan Cameron decided to honor the worst movies, TV shows, and internet videos (primarily focusing of YouTube Poop) in the world, doing it in a way that parodies Award Shows (kinda like the Golden Raspberry Awards, only it's for "the best of the worst, and the worst of the best"). This "award show" takes place atop the roof of a building, where the weather is unusually snowy. However, this "show" is interrupted by a trans-dimensional vortex, which spews out giant octopus tentacles that smash everything in their path. Characters from the CD-i Games appear and cause chaos and discord...

And the man behind it all... is Aran Ryan of Punch-Out!!

Aran has wicked-awesome powers in this this incarnation, the kind that rival the Elder Gods... Oh, Crap!.