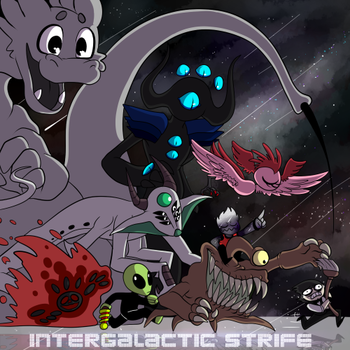 Are you ready?
Advertisement:

Intergalactic Strife is an upcoming video game created by Tumblr user Mx Bones. In the game, you battle as Pilot characters, both old and new. As of now, the game is in very, very early development, so much so that an engine has not yet been decided upon, so not too much is known about it.

It takes place in a universe where everything has fallen into chaos, and certain characters are being sent off to war. In this war, there are 7 factions, divided into night and day; The Day Side has Humans, Animals and Robots. The Night Side has Ghouls, Monsters and Aliens. The 7th faction is Deities, which is both Night and Day.

Since Bones left Tumblr in August 2016, the state of the game is uncertain.