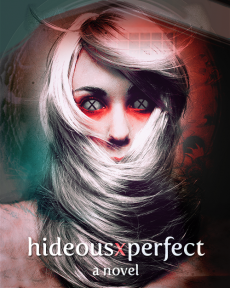 It's actually a novella.
"This city turns decent folks into nothing more than ghosts."
Angelspit - Shaved Monkey.

Hideousxperfect (stylized as hideousxperfect) is a work-in-progress novella by Endless. In the fictional city of Fairhill, <INSERT STATE HERE>, a girl falls from the sky and remarkably survives, the whole city contorts out of shape, and that city's inhabitants gradually become mindless slaves to an alien force. Also Tasha Mayfield drops out of college.

Shortly after this rushed decision, Justin Cooper, a customer at the café Tasha works at, gives her an address she should probably go visit with the promise 'it could save [her] life'. Now, given he has something of a reputation for his world-is-out-to-get-me delusions, she's a little suspicious. But when she discovers her best friend to be irreversibly mindless, now a pawn of the alien, she reconsiders Justin's suggestion and is shortly dragged into a Ragtag Bunch of Misfits masquerading pretty well as La Résistance.

This page is a WIP, and as a result the trope list is incomplete.