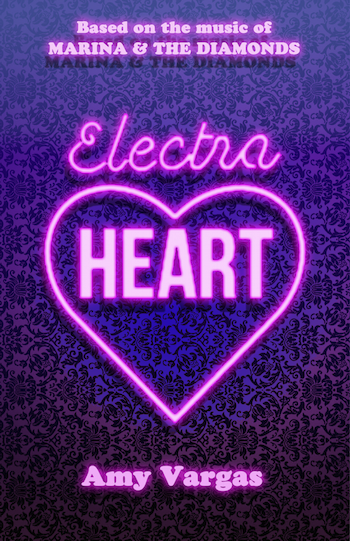 ”Lights, they blind me. It's my turn now."
Electra Heart is a NaNoWriMo 2015 novelnote in "revision stages" by Astriferous, based on the album of the same name by Marina & the Diamonds, reinvented into a Space Opera, heavily inspired by the likes of Cutey Honey, Star Wars and Yellow Submarine. It is, within the CPC Verse, the series that takes place the farthest into the future(late 21st century).

Electra Heart is a quirky girl who once gets her heart broken, but she swore to never let another girl to go through the same thing she did. So, she reinvented herself, and now she’s living her dream as a heroine who breaks other people's hearts. From that moment on, she was never alone.

Meanwhile, in a distant planet, where a race of colorful, canine looking aliens, the sonaga, live; Lady Blue, a calm and disciplined soldier, is told that one of her mates has disappeared. Reports say that she claims to call herself Armour Love, and that she’s a Guardian of Love. She is now on her way to bring her back to their planet, and possibly rescuing an old love who’s stranded someplace in the galaxy.

Cut to Earth, where an unhappy suburban housewife, and a carefree biker who gets it on with everyone, are abducted by extraterrestrial beings.

As development advanced, it has been expanded into other works, also based on Diamandis’ discography: