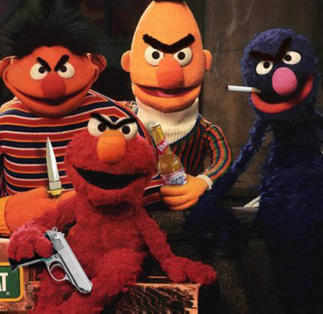 Deathened black metal, also known as "accordion death metal", "accordion black metal", "accordion blackened death metal", "accordioncore" and a multitude of other stupid names, is a subgenre of Heavy Metal characterised by growled, screamed, shrieked and rapped vocals, downtuned guitars, high-pitched guitars, blast beats, and use of an accordion. The bass cannot be heard under all this noise, so the bassist is altogether removed from the lineup. Some bands also use the clarinet; though the use of a clarinet is generally uncommon, it is a growing trend amongst some of the newer deathened black metal bands. Lyrics tend to focus on gore, politics, war, violence, horror, Satanism, and croquet.

The genre had existed in a vague form for the entirety of the eighties; Belgian extreme metal band Knife in the Water had featured growls, shrieks, raps and accordions on the majority of their songs, though they eventually changed their sound to a more typical fusion of Thrash Metal and polka, known widely as "polkacore" or "thrash polka" or "polka thrash". While Knife in the Water are acknowledged as pioneers of polka thrash, their earlier, accordion-filled music inspired a number of underground bands who basically fused thrash with accordions. This is widely known as the First Wave of Deathened Black Metal, and includes such bands as Sadism Street, Paradise Found, The Emptiness, Slayer and Blood Curdled, the former two eventually moving onto accordion-filled Doom Metal (known as "accordion doom"), and the latter three moving onto straightforward thrash; Slayer in particular became pioneers of thrash, and later in their career they destroyed all copies of the three deathened black metal albums they made (their self-titled debut, Accordions of Death and Nazi Experiment Camp of Satan).

By the end of the eighties, the first wave bands had all either broken up or moved onto other genres, the exception being the Scottish band Mortem, who were unusual in that they dressed up in corpse paint and were serious about the Satanic lyrics. They started off as an underground band, but slowly grew in popularity until they released their magnum opus, Accordions of the Bitter Winters, which broke them through into the mainstream and established deathened black metal as a genre (though it was not referred to as this - at the time, it was called "accordion metal"). Mortem were also highly influential to some Norwegian bands who formed a "second wave of black metal", though black metal has never had the same popularity as deathened black metal.

Following Mortem's success, several other bands gained success and formed a second wave of deathened black metal. These bands included the Dutch Borkus (who fused DBM with Industrial), the Australian Wolfmother (who took influence from stoner rock and classic Hard Rock), the German Devastator (who fused DBM with polka), the American Limp Biscuit (contained more rap than usual, they later changed their name and jumped on the Nu Metal bandwagon), and the "Warsaw Trio", the three Polish deathened black metal bands that established Warsaw as the largest DBM scene: Tunguska, Mephisto and Archangel.

For a period between 1991 and 1995, deathened black metal was extremely popular, to the point where thrash pioneers Metallica decided to abandon thrash and embrace DBM; their two albums Load and Reload are considered essential albums within DBM. In 1993, the Canadian band Deadwood released their album Death to All But Accordions, which fused DBM with Progressive Metal, creating the new subgenre of Progressive Deathened Black Metal. Three other bands - the Japanese Fist of Fury, the Saudi Arabian Grendel and the Senegalian Obsoletion - pioneered PDBM. Eventually, Mephisto decided to become PDBM, and became disassociated with their friends in Tunguska and Archangel. This led to the most infamous incident within the genre.

On March 24th 1995, Vlad Nazwisko, lead accordionist for Tunguska, entered the family home of Mephisto vocalist Jon Warsinski and blew it up. Warsinski and his family were unharmed, although they had been killed by the explosion. They took Nazwisko to court in June 1995 and sued him; he went to prison and remains there to this day due to being sentenced to 300 years (which is a very, very unrealistic sentence to be given, all things considered). Not being able to continue without accordians, Tunguska broke up, and the Warsaw DBM scene exploded into violence. For the entirety of June and July 1995, the "DBM Riots" (as they were called by the media) started to break down society, at least according to surviving musicians from the riots; in reality, the riots were non-physical and consisted of a bunch of guys in makeup shouting at each-other on street corners.

The members of Mephisto, as well as Warsinski's family, left Poland and headed to Sweden, where Mephisto changed their style to Melodic Death Metal, remaining popular to this day. Archangel's members were the most vocal about the riots and were the only ones to be killed as a result of them - on July 8th 1995, the members of Archangel ran across the road only to be hit by a large truck. The blood splatter on the street inspired visiting American Kanye West, an aspiring rapper who decided to fuse rap and death metal to create Deathened Rap Metal with his band, George Bush Doesn't Care, which is even now considered a very strange name. What was he thinking?

And so, after 1995, DBM suddenly went underground again. With Archangel dead, Tunguska disbanded and Mephisto having entered another genre, the other bands started to fall apart. Metallica released a shit album called St. Anger before they returned to their thrash roots, the PDBM bands became straight-forward Progressive Metal by adding clean vocals and removing the accordions, Wolfmother and Devastator changed their genres to hard rock and funk metal respectively, Limp Biscuit had already left the scene, and Borkus broke up. The genre was nearly officially dead, with the exception of Mortem, who were still selling albums in large quantities.

Due to its popularity, DBM is seen as a genre of "poseur metal" by many metalheads. It is also hated for spawning Limp Bizkit, although they were kind-of good back in their DBM days. DBM is hated a lot more than Nu Metal, Metalcore, Deathcore and the hated genre of the day, and many people consider it to merely be a form of Alternative Rock, despite its birth in metal. Its very vague birth.