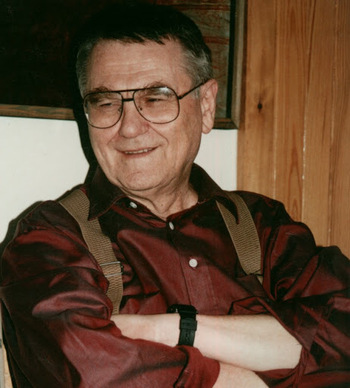 Zdzisław Beksiński was a Polish painter, photographer and sculptor specializing in the field of dystopian surrealism.

Beksiński was most for the three phases his art went through:

He died 21 February 2005 in Warsaw, Poland, having accidentally been stabbed by Robert Kupiec, the teenage son of his longtime caretaker, over a despute involving a few hundred złoty (approximately $100 in America). A museum would open in dedication to him in Sanok, Poland and a Beksiński museum housing 50 paintings and 120 drawings from the Dmochowski collection (who owns the biggest private collection of Beksiński's art) opened in 2006 in the City Art Gallery of Częstochowa, Poland. On 18 May 2012 with the participation of Minister of Regional Development Elżbieta Bieńkowska and others took place ceremonial opening of The New Gallery of Zdzisław Beksiński in the rebuilt wing of the castle. On 19 May 2012 The New Gallery has been opened for the public. A 'Beksiński cross', in the characteristic T-shape frequently employed by the artist, was installed for Burning Man the same year of his death.

Tropes found in Zdzisław Beksiński and his work: