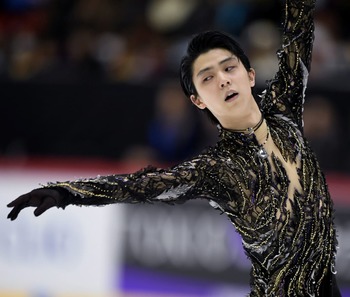 Yuzuru Hanyu (born December 7, 1994) is a Japanese men's single discipline figure skater. He is most famous for winning gold in two consecutive Olympic Games, 2014 Sochi and 2018 Pyeongchang (being the first male figure skater to do so in 66 years, after American skater Dick Button). He started skating at the age of four, following his sister Saya to a rink for fun, and has since then become the most prolific figure skater in history. He has broken world records 19 times to date. Consistently excellent in both technical skills and artistry, he pleases both fans of figure skating as a sport and those who prefer it more as a form of art.

After winning the Junior Worlds Championships in the 2009-2010 season, Hanyu debuted as a senior skater and has been active there since. He's had his share of misfortune. Injury has held him back at times, most notably in the 2017-2018 season, where he only got back to jumping his most difficult jumps just a fortnight before the Olympic Games.