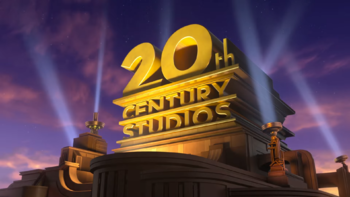 The making and authorized distribution of this film supported over 14,000 American jobs and involved over 600,000 work hours.
Advertisement:

is a film production company owned by the Walt Disney Company. From its inception on May 31, 1935 (under the name "Twentieth Century Fox"note There was initially a hyphen between "Century" and "Fox", but it was dropped after Rupert Murdoch gained full control of the studio in 1985, a merger of two separate production companies, William Fox's Fox Film Corp. and Darryl F. Zanuck's Twentieth Century Pictures, Inc), to its acquisition by Disney on March 20, 2019, it served as one of the major Hollywood studios.

Well known for its Fanfare composed by

Alfred Newman, which has essentially become the official Theme Tune of the motion picture industry. And, of course, its logo—inherited from Twentieth Century Pictures—the studio's name as a giant structure surrounded by searchlights (last revised in 2009, as of Avatar).

In its day, 20th Century was considered one of the most prestigious of the Hollywood studios, known for its musicals (especially in the 1940s with Betty Grable), and prestige Bio Pics (such as John Ford's 1939 film Young Mr. Lincoln). They also capitalized on its association with Shirley Temple, who single-handedly made over $20 million for the studio in the late 1930s. The studio was distinguished by its glossy production values and sharp-focused, high-contrast cinematography. In addition, under long-time founding executive Zanuck, the studio became known for making some of the most important and controversial films in Hollywood, with films that addressed sensitive issues such as antisemitism (the Academy Award winning Gentleman's Agreement), poverty (fellow Academy Award winner The Grapes of Wrath), unfair unionization and environmental destruction (a third Academy Award winner, How Green Was My Valley), and institutionalized mistreatment of the mentally ill (The Snake Pit, which caused 13 states to change their laws when it came out).

In the 1950s, alongside its more standard dramatic fare, 20th Century produced a series of Rodgers and Hammerstein musicals, comedies with squeaky-clean teen idols, and well-regarded biblical epics, hoping to stave off the threat of television by the sheer size of its productions. Unfortunately, this strategy proved wildly inconsistent in results, the grotesquely overpriced Cleopatra would have nearly bankrupted the studio if the marathon musical The Sound of Music hadn't become the studio's most profitable film at the time. Furthermore, the strategy then backfired spectacularly when the studio attempted to duplicate that success by producing three expensive, large-scale musicals over a period of three years: Doctor Dolittle (1967), Star! (1968) and Hello, Dolly! (1969). All were released amid massive pre-release publicity and all lost equally massive amounts of money for the studio that could have sunk the studio again if it weren't for the spectacular success of the hit SF series, Planet of the Apes, starting in 1968 to keep it afloat. The result was that several top studio executives (including the company founder's son, Richard Zanuck) lost their jobs, and the studio itself went into such dire financial straits that it produced only one picture for the entire calendar year of 1970. Eventually, by 1977, there were moves to have the studio sold off and perhaps dismantled, but that was the year a little, seemingly absurd film called Star Wars exploded into popular culture. 20th Century was the first major studio to embrace the then-new medium of home video through a deal with Magnetic Video, which they would subsequently fully acquire as a subsidiary; its Hello Dolly! was the first film released on home video in the U.S.

Ownership of the studio changed hands a few times in the 1980s. 1981 saw a joint takeover by oil billionaire Marvin Davis and commodities trader Marc Rich; by 1984, Davis had bought out Rich's half following the latter's indictment for various financial crimes and subsequently fleeing for Switzerland. Not long after, Davis sold Rich's former half to Australian media tycoon Rupert Murdoch, who then bought Davis' half and proceeded to also buy the Metromedia group of independent television stations; with the backing of Murdoch and Barry Diller, the Fox Broadcasting Company was launched in 1987, at first only on weekends before gradually growing into a week-long schedule. Soon enough, thanks to the Fox network, the Fox name was being used for all sorts of new networks and ventures, even ones with only a tangential connection to the then-namesake film studio.

20th Century itself entered something of a rough patch in the late 1990s to the early 2010s among film buffs; in spite of the company releasing several well-reviewed hits during that same timespan, the company became notorious for enforcing considerable amounts of Executive Meddling across their slate of movies — particularly where adaptations were concerned — largely blamed on film chief Tom Rothman (who, on the other end of the spectrum, helped found the studio's indie/arthouse division, then known as "Fox Searchlight Pictures"). The company had a reputation of focusing on profit over creativity, with studio executives having more control over a film's production than the director did, which is why a number of well-known franchise directors — aside from some industry giants like George Lucas, James Cameron, and Ridley Scott, who all had enough clout to make their movies without much outside interference — kept away from the studio during this period. Nonetheless, 20th Century remained successful and later experienced something of a renaissance under the supervision of Stacy Snider and Emma Watts, who took over in the mid-2010s after Rothman stepped down and subsequently went to Sony Pictures.

However, in spite of 20th Century's overall success, one of the biggest shockers in modern Hollywood soon followed. On December 14, 2017, in one of the biggest media shake-ups in decades, 20th Century's then-parent company 21st Century Fox revealed its intention to sell the majority of its entertainment assets to a new owner. Disney subsequently became the heir apparent to acquire the company in a cash-and-stock deal worth over $71.3 billionnote initially an all-stock deal worth $52.4 billion, it was increased following a brief bidding war with Comcast, the largest acquisition ever in Disney's history.note For a frame of reference, it cost an estimated $16 billion for Disney to buy Pixar, Marvel Comics, and Lucasfilm combined, making this deal over four times as expensive as those three previous acquisitions put together. The move came on the cusp of Disney's own plans to launch their own streaming service, Disney+, with 20th Century's backlog of more family-friendly properties being ideal for the service (while everything else could be sent to Hulu, which Disney would gain a majority stake in following the proposed merger when the shares were combined).

After about a year-and-a-half of regulatory approvals, Disney formally seized control of the studio on March 20, 2019, ending 20th Century's eighty-four year run as one of the major Hollywood studios and reducing the number of major film studios from six to five (Warner Bros., Paramount, Sony Pictures, Universal Pictures, Disney), a number that had not been seen since The Golden Age of Hollywood. The final film released prior to the deal closing was Alita: Battle Angel, and the final home media release was Bohemian Rhapsody. The first film released after the deal closed was Breakthrough, and the first home media release was Annapurna Pictures's If Beale Street Could Talk.

Disney stated that the brand will continue to live on as one of the Disney Studios' core film brands, focusing primarily on adult-oriented fare or material unsuitable for Disney's other studio brands, displacing the inactive Touchstone Pictures label in the process.

Upon the deal closing, the studio as an autonomous entity was no more; Disney assumed all production and distribution duties for existing properties, they gained the FX cable channel, and their television distribution division, Disney Media Distribution now handles all off-network reruns, streaming rights, and global rights to the catalog. Disney's home entertainment arm, Walt Disney Studios Home Entertainment, assumed distribution of 20th Century's physical media. In addition, Disney's Marvel Studios got all of the characters 20th Century had the rights to such as the X-Men and Fantastic Four, as well as Lucasfilm (even after Disney bought Lucasfilm in 2012, 20th Century maintained the distribution rights to the first six Star Wars films, while owning Episode IV: A New Hope outright as part of a licensing deal made with George Lucas before the start of production).

The iconic logo was of course part of the deal, and you will still see it at the beginning of their movies, but that's only for marketing purposes, because Rupert Murdoch, as part of the agreement, kept control of all the Fox trademarks save FX, granting Disney an exclusive licensing agreement to continue using the "Twentieth Century Fox" name as long as they wanted to (although they eventually changed it, the studio was legally known as Twentieth Century Fox Film Corporation as well until 2020 when Disney legally renamed it into 20th Century Studios, Inc). Murdoch retained the Fox network and Fox News Channel while creating new production & syndication arms, Fox Entertainment and Fox First Run; the new arms now handle all network and syndicated shows produced in-housenote Fox Television Stations had assumed production duties for Twentieth Television's programs by 2014, by that point Divorce Court and Dish Nation, when that division split from FTS and deferred to Twentieh Century Fox Television. 20th Century's Century City studio lot will continue to be operated by Disney until at least 2026, which some speculate could be renovated as a result of the deal.

As with many studios during the early days of television, 20th Century established a television division, producing such successes as M*A*S*H, Buffy the Vampire Slayer, Glee, and This Is Us. When the Disney merger was finalized, the division was dismantled along with the film division; Disney then reestablished the television division as a sister studio to ABC Studios (keeping the "Twentieth Century Fox Television" name and logo), both studios becoming part of a restructured Disney Television Studios group.

In August 2019, Disney, citing disappointing box office numbers from inherited films Dark Phoenix and Stuber, announced that it would take a more direct role in green-lighting films under the brand, focusing primarily on established intellectual properties rather than smaller, one-off fare (outside of films from what was at the time still "Fox Searchlight"). This effectively resulted in almost all films in the early stages of production without a release date getting scrapped or shelved indefinitely as the slate was reassessed. Disney also shuttered 20th Century's animation house Blue Sky Studios (which had seen success with the Ice Age and Rio series) as a cost-cutting move, cancelling an adaptation of NIMONA that was deep into production. In 2022, it was announced 20th Century Studios would only produce roughly 2-3 theatrical releases per year beginning in 2023, while concentrating a larger focus on content for Hulu and Disney+ (roughly 10 films per year).

In January 2020, in a move seemingly intended to dissociate their content from that of the remaining Murdoch assets, Disney announced that the word "Fox" was to be dropped

From 2013 to 2017, it was the distributor of DreamWorks Animation films (except Korea and China), beginning with The Croods, after DWA's previous deal with Paramount expired after Rise of the Guardians. Even after NBCUniversal purchased the studio in 2016, Fox continued releasing DreamWorks Animation films until their contract ended with the release of Captain Underpants: The First Epic Movie. 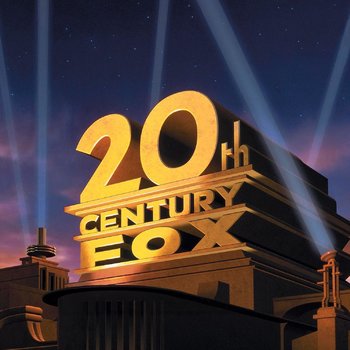 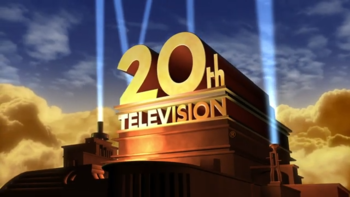