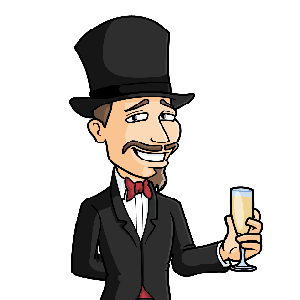 Top Hats and Champagne is what would happen if you take just about every form of stereotype of your typical PC elitists, but that's just touching the tip of the iceberg.

One of his well-known series "Stupid Console Peasant Quotes" jabs at many misinformation regarding PC and consoles, though most times it's just a Curb-Stomp Battle.

However, around October of 2015 he decided to branch out and reform his channel. Actually, his most common show is Top Hats and no Brain, where he deals with both Console Peasants, and SJW equally.

In March of 2019, his YouTube account became suspended due to prohibited "hate speech" activity against protected groups (presumably due to the Top Hats and no Brain content that he did).

Not to be confused for another person with a top hat for a persona.

Tropes that apply to Top Hats and Champagne