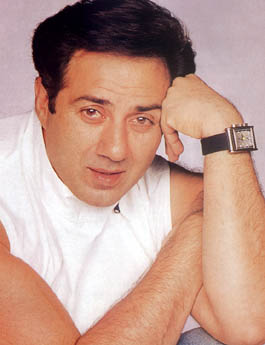 Sunny Deol (born 19 October 1956) is the son of the legendary actor Dharmendra and older brother to Bobby Deol.
Advertisement:

Sunny is mainly known for movies in the action genre. Sunny Deol had a superhit debut in his home production Betaab (1983). He went through a lean phase for a couple of years until Arjun (1985). What followed were several hits, including Paap Ki Duniya (1988), Tridev (1989), ChaalBaaz (1989), among others. His defining moment as an actor came with another home production Ghayal, a film that won him the National award for the Best Actor along with the Filmfare Award for the Best Actor. He was critically acclaimed for his hit movie Dacait which was directed by Rahul Rawail. Yateem is another movie which shows his capability as an actor.

Sunny Deol delivered huge hits through the nineties in Narsimha (1991), Lootere (1993), Damini (1993), and Darr (1993). His supporting role as a drunk lawyer in Damini fetched him all the awards & accolades in Bollywood. However, his performance in Darr was not well received by either critics or audiences, leaving Shah Rukh Khan to win overwhelming praise for his performance as the psychotic villain of the film. In the mid-nineties, Sunny delivered five big hits in a row - Jeet (1996), Ghatak (1996), Ajay (1996), Ziddi (1997), and Border (1997).

Sunny Deol's biggest blockbuster to date came in the year 2001, with the all-time blockbuster Gadar: Ek Prem Katha. The film shattered all records at the Indian box-office. Sunny continued his streak with Indian and Farz (2001) & The Hero (2003). Among his last few movies, Apne (2007), and Heroes (2008) have done well in the box office.