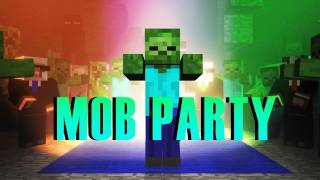 Some of Slamacow's early work.
Advertisement:

is a YouTube channel run by Steven Davis, who is well-known for his Minecraft animations. Citing fellow animator and YouTuber CaptainSparklez as inspiration, his work is done with Minecraft models imported to and animated/rendered in 3D Studio Max.

Most of Slamacow's videos primarily feature a cast comprised of few of Minecraft's mobs, and are usually humorous in tone; recurring characters include Bart the Enderman (known as Bartenderman in earlier videos), a bowtie-wearing Enderman who formerly ran the local monster drinking joint, Dave the Zombie, a white-shirted zombie who gets up to wacky hijinks, and later on, the Minecraft avatar of Slamacow himself.

"Cube World" and "From the Ground Up" are similar, self-contained pieces with a loosely connected canon and depart from Slamacow's usual fare by being serious, moody and emotional. Both feature original, Minecraft-inspired music written and sung by Laura Shigihara (known for composing the soundtrack to Plants vs. Zombies and the song "Everything's Allright" from To the Moon). "Cube World" tells the story of Steve? and his sole companion, a pet pig, defending against monster hordes under the control of their arch-nemesis Herobrine. "From The Ground Up" features an elderly husband and wife (incidentally, Steve?'s parents). The old woman has unsettling dreams of impending disaster and begins to fortify their home while her husband chastises her for what he thinks are irrational fears... until he wakes up one evening to see a rift in the world with monsters pouring out of it. He rushes home to his wife where together they must make their last stand, as the monsters batter their castle and an Ender Dragon loops overhead...