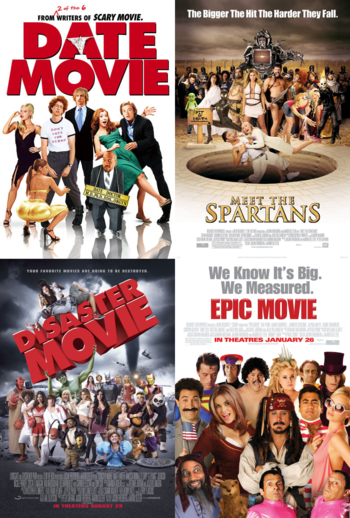 Notice a theme?
Aaron Seltzer and Jason Friedberg are a pair of writer/directors that collaborate with each other on all of their projects. They create comedic movies that parody and reference pop culture in the Zucker, Abrams and Zucker style of rapid-fire gags without concern for the overarching plot or characterization.
Advertisement:

After Disaster Movie flopped even by their standards (largely due to popping up in August, which has become a much more crowded Dump Month in recent years), they took a short break before jumping on board the Twilight train with Vampires Suck. While the latter was still not well received, it did slightly better critically than their previous couple of films and returned them to box office glory. They have since released two more projects, Best Night Ever and The Starving Games both in 2013, the latter a clear parody of The Hunger Games. While their output has slowed since their heyday, they've hardly stopped.

Mystique, an already stunning mutant played by Carmen Electra, gave Peter the opportunity to request any features he'd like her to shapeshift before they passionately got it on... and of all options, he chose a monobrow and a flabby grandma body.

Mystique, an already stunning mutant played by Carmen Electra, gave Peter the opportunity to request any features he'd like her to shapeshift before they passionately got it on... and of all options, he chose a monobrow and a flabby grandma body.