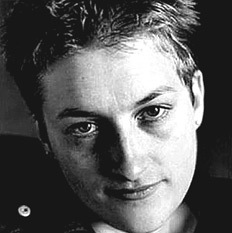 I am the beast at the end of the rope."
Sarah Kane (3 February 1971 – 20 February 1999) was a English Playwright, whose work is classed in the league of In-Yer-Face Theatre. From her mind she created a mirror to the blunt reality that is human cruelty. Her work was filled with themes of redemptive love, sexual desire, pain, torture— both physical and psychological— and death. While her works were reviled when first performed, they have since been acclaimed after her death.

Advertisement:
Her first play, Blasted, shocked the stale West End critics; their reviews became iconic and Sarah became friends with other iconic playwrights, like Edward Bond, Caryl Churchill and Harold Pinter. She would also inspire others, including Martin Crimp and Mark Ravenhill. Tragically, while she battled severe depression for many years, it was a battle she would lose. After a failed attempt at suicide by overdose, she was admitted to hospital and put on suicide watch, but there was a fatal lack of communication, leading to Sarah going unobserved long enough to hang herself. She was just 28 years old.Since Sarah's death, her work has been revisited by the critics, her plays are regularly performed and her work is part of the Performing Arts curriculum in many British Universities.