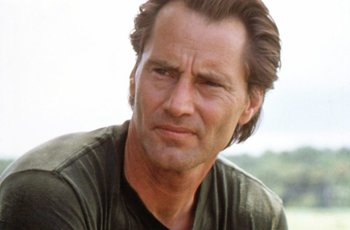 His first brush with the mainstream came once he moved to New York City during the mid-sixties, when he served as the drummer for the highly eccentric psychedelic folk band Holy Modal Rounders around the time of their third album. The Rounders subsequently appeared in one of Shepard's early plays.

Drumming for a reasonably successful rock band is a career in and of itself for most, but for Shepard, this was barely a hobby. He was highly involved in New York City's off-off-Broadway theatre scene in the '60s and early '70s. His best-known plays were written in the late '70s and early '80s, at which time he had relocated to San Francisco. Some of his most notable works of the period are Curse of the Starving Class, Buried Child (for which Shepard won a Pulitzer Prize) and True West. At the same time, he was collaborating with no less than Bob Dylan, helping him with his film Renaldo and Clara and co-writing Dylan's song "Brownsville Girl."

His plays are just as awesome as he was. Falling somewhere between Absurdism and Postmodernism, plays by Sam Shepard tend to be darkly funny and somewhat menacing. (Just read a synopsis of Tooth of Crime or Buried Child some time.) Also, if a play doesn't deconstruct The American Dream at some point, he probably didn't write it.

Did we mention that he was also an actor? He claimed to act simply to fund his playwriting career, but if you've ever seen one of his films, you know that he was a damn fine actor for someone who only really dabbled. He was nominated for an Academy Award for his portrayal of Chuck Yeager in The Right Stuff. (Think about that — Chuck freakin' Yeager. And he nailed it.) You may also recognize him from Black Hawk Down, The Assassination of Jesse James by the Coward Robert Ford, or any number of other bit character roles he took over the years. (His choices in this regard seemed to defy categorization — e.g., he was Dolly Parton's husband in Steel Magnolias, like maybe tenth or eleventh in the cast of characters. But that's Sam for ya.)

And of course that's just his professional life; the company he kept privately was no less awesome. When Shepard first moved to New York, he lived with Charles Mingus Jr. (yes, the son of that Charles Mingus). He was briefly involved with Punk Rock legend Patti Smith before shacking up with Jessica Lange. The level of talent his productions attracted was also very high; for instance, his 2000 play The Late Henry Moss premiered with Nick Nolte, Sean Penn, Woody Harrelson, and Cheech Marin in the cast.

To recap: cowboy, psychedelic rock drummer, playwright extraordinaire, actor (when he felt like it), and lived with one of the most beautiful actresses, ever.

Works by Sam Shepard include: