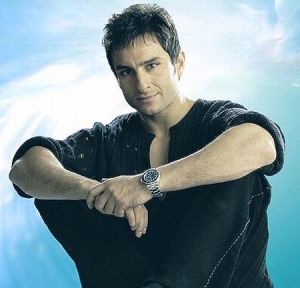 Saif Ali Khan (born Sajid Ali Khan, 16 August 1970) is an Indian actor in Bollywood films. He is the current Nawabnote Viceroy of Pataudi, which he recently inherited from his father Mansoor Ali Khan Pataudi. His mother is the actress Sharmila Tagore, herself a descendant of Rabindranath Tagore, a famous poet who wrote the lyrics to the Indian national anthem. Saif has two sisters; actress Saba Ali Khan and Soha Ali Khan. He is the heir apparent to the headships of both the royal houses of Bhopal and Pataudi.

Khan made his debut in 1992 with Parampara. He had his first major successes with the 1994 films Main Khiladi Tu Anari and Yeh Dillagi. After going through several years of decline in the 1990s, he rose into prominence with his performance in Dil Chahta Hai (2001), which marked his professional turning point. His performance in Nikhil Advani's Kal Ho Naa Ho (2003) won him the Filmfare Best Supporting Actor Award, and he won the National Film Award for Best Actor for his performance in Hum Tum (2004). He then had commercial success with films like Salaam Namaste (2005) and Ta Ra Rum Pum (2007), and starred in critically acclaimed projects such as Parineeta (2005) and Omkara (2006). These successes put him among the most successful actors in the industry. Since 2009, Khan has branched out into film production.

He is the founder-owner of his production company Illuminati Films, which produced the 2009 box-office hit, Love Aaj Kal. He recently married Kareena Kapoor, his frequent costar and live-in girlfriend of several years. He had been married once before, and his children from that marriage are now in their teens.