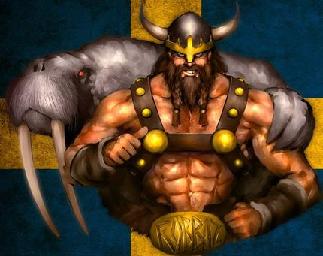 Robbaz (real name Robert Öberg) is a Swedish YouTube personality known for gaming videos with his own brand of commentary, with the gimmick that he sees himself as a Viking warrior with a fascination for nipples and kink (these being recurring words he has used in his videos). The games he has shown on his YouTube page include The Elder Scrolls V: Skyrim, Saints Row: The Third, Happy Wheels and Cry of Fear.

He has also made videos comparing the graphics of multiplatform games for the PC, Xbox 360 and PS3. Naturally, these haven't gone without flame wars, which Robbaz even lampshades on his Web site when the "Comparisons" tab is moused over.

He's also a professional chef in real life. In fact, he runs a cooking subseries which can be found here

.And his Web site can be found here

"Anyway, like and favorite this shit! Become A Viking Today!"