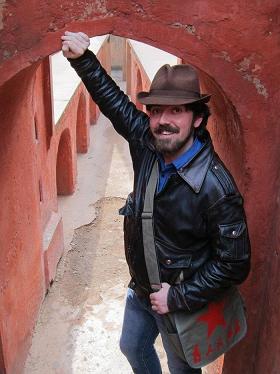 Because hanging around Jantar Mantar is all in a day's work for some people.
Advertisement:

R. Jean Mathieu is a speculative fiction writer, publisher, and world traveler, currently residing somewhere in China. His work is mostly informed by his varied and idiosyncratic life, which has involved stints in Buddhist meditation retreats, overland trips across Asia, and crewing sailing ships. He cites Ray Bradbury, Jack Kerouac, and Frank Herbert as inspirations, and it shows.

Most of his work is in the form of short stories, which have grown progressively longer over time. They can be found here

. He's won several awards, most notably third place Ray Bradbury award in 1999...at the age of 13. He has finished one novel (action-adventure) that is awaiting publication, and is at work on another (time travel mystery).

Tropes found in his body of work: