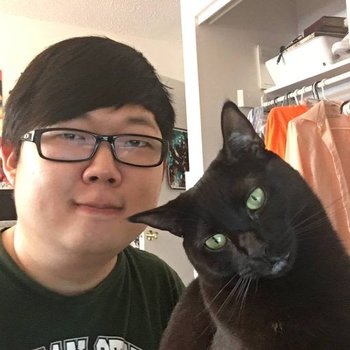 SungWon Cho (known online as ProZD, born December 9, 1990) is an American voice actor known for taking requests and dubbing comics, but also for creating his own works, mostly short sketches, which are often based around video game and anime clichés, to the point where several arching stories are going on at once and a few of them have even crossed over. He has been known in the past for doing song covers in a Goofy voice. He also has a gaming channel, Press Buttons 'n Talk

, with his friend Alex.

, among other places. He was also on Vine, but has uploaded most of his vine clips to YouTube even before the former service went down, and has since done professional voice acting for various non-web-related works.

His other acting roles include:

His skits include the following tropes:

The characters' speech is represented with grunts instead of reading out full sentences. From "games where only the cutscenes have full voice acting".

The characters' speech is represented with grunts instead of reading out full sentences. From "games where only the cutscenes have full voice acting".