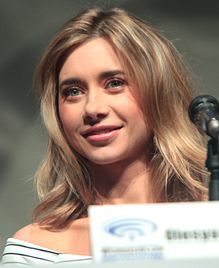 Olesya Yurivna Rulin (Russian: Oлeся Юрьевна Pулина; born March 17, 1986 in Moscow, USSR) is a Russian-American actress. She is known for co-starring in all of the three films of the High School Musical franchise as Kelsi Nielsen. She also starred in the films Private Valentine: Blonde & Dangerous, Flying By, Expecting Mary, Halloween Town High, and Family Weekend.