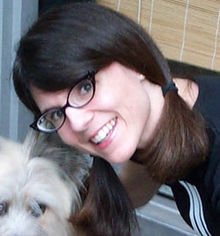 Nancy Novotny (born June 4, 1963) is a Texas based radio personality and voice actress who has dubbed anime titles for ADV Films and Seraphim Digital Studios. Her first and arguably star-making role was Yomi from Azumanga Daioh. She is best know for her roles as the aforementioned Yomi, Yuka in Elfen Lied, Ren Mikihara in Full Metal Panic? Fumoffu, and Madlax.

She was influenced to be a voice actor after she watched Ranma 1/2, with her first role being Yomi in Azumanga Daioh.

Nancy is not active at the moment since she moved to Portland, Oregon and resides at the state as of 2020.