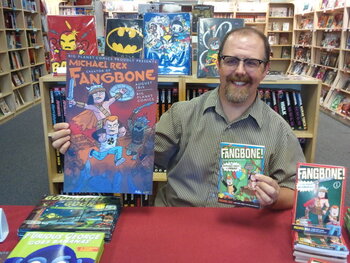 Sine the late 90s, Michael Rex has written and illustrated over 40 books that cover a wide range of styles from parodies of classic kids books to graphic novels for elementary schoolers, many of which have become popular with kids and acclaimed by professional reviewers of kids' books. One of his most popular works is his 2012 trilogy Fangbone! Third Grade Barbarian, which was such a hit with kids that it received an Animated Adaptation from Canada's Radical Sheep Productions known simply as Fangbone!, which aired on Disney XD in 2016 (but was initially set to debut in 2014). Somewhat unusually for a cartoon based on a kids' book, Rex had a large amount of involvement in the TV series, serving as an executive producer and designing some of the concept art for the show.