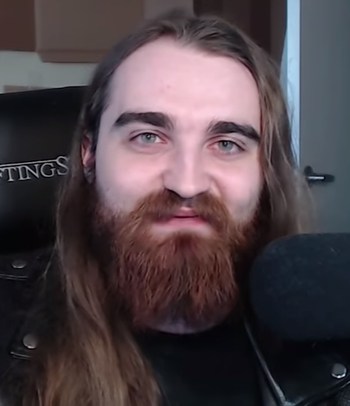 Your quasi-entertaining host as always.
A video game-based YouTuber who's been making videos for over five years, Medraut Stowe is a Canadian YouTube

Often collaborating with other YouTubers, Mah-Dry-Bread is perhaps best known for his "Flash Trash" series, in which he and GodfreyGames play bad Adobe Flash horror games, "Payday 101," in which he analyses various weapons and skill builds in Payday 2, and his Creepypasta Readings, usually written and submitted by members of his forum.

He also has a weekly Pokémon Challenge video in which he sees if he can beat a Pokemon game with limits on Pokemon (such as only one member of a Pokemon species, Pokemon gotten through trade, or Honey tree Pokemon), a certain move handicap (no new moves after its caught, only Metronome), or no free healing (such as at a Pokemon Center or places that work similar to Pokemon centers such as your bedroom).

He is also one of the founding members of the weekly charity livestream "Pass the Controller Please," and appears on HeroTheyCallMe's wrestling podcast, "Hero is Wrestling."

with his forum here