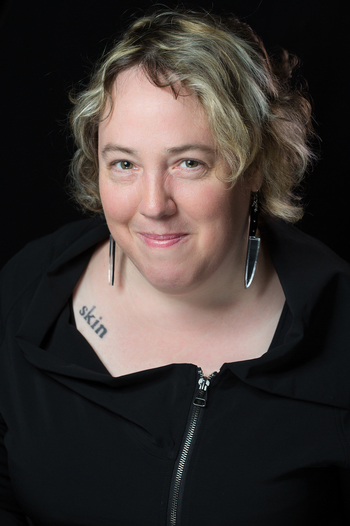 Kelly Link (born July 19, 1969) is an influential American writer of hard-to-classify short fiction which melts the line between genre and literary. Alternatively categorized as fabulism, slipstream, surrealism, or magical realism, her distinct style of writing gave her a cult writer status in the early years of her career, but has since gained wide recognition from both the genre and literary worlds. Her stories have won a Hugo Award, three Nebula Awards, and a World Fantasy Award, and she has also been nominated for the Pulitzer Prize and was a 2018 recipient of the Macarthur "Genius" Grant. In 2015, Clarkesworld Magazine polled nearly a thousand writers

Link's stories are particularly famous (and polarizing) for their endings, which are a category of their own. Ranging from twist endings, Gainax endings, ambiguous endings, endings that feel like they end too soon or not at all, dream logic endings, puzzle box endings: a Kelly Link story is guaranteed to end in a way that's impossible to anticipate. Link has spoken at length about the thought she puts into her distinct endings, and in one interview said: "Making decisions about identity means shutting down certain story possibilities, but that’s true of every story: you make a series of decisions and you shut doors and you proceed along a narrowing path. At least that’s how I arrive at my endings... there’s a movement toward a very specific place."