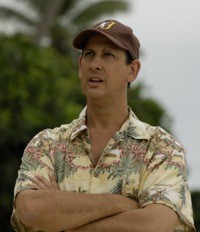 Jonathan Mark Shiff ("The Other JMS") is a producer of Australian children's shows.