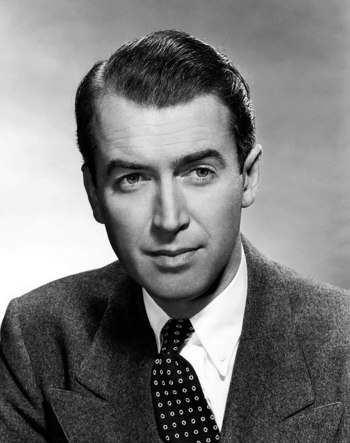 Jimmy Stewart in his 1940s heyday.
"If I had my career over again? Maybe I'd say to myself, 'Speed it up a little.'"
Advertisement:

James Maitland "Jimmy" Stewart (May 20, 1908 – July 2, 1997) was an American film actor who began his career during The Golden Age of Hollywood and remained a popular screen presence for much of the 20th century. He is perhaps most famous for his role as George Bailey in the classic film It's a Wonderful Life, with his Jefferson Smith in Mr. Smith Goes to Washington also getting a strong look-in.

Among his other films were You Can't Take It with You, The Philadelphia Story, The Shop Around the Corner, Harvey, The Greatest Show on Earth, Rear Window, Vertigo, Anatomy of a Murder, and The Flight of the Phoenix, as well as numerous Westerns (including Destry Rides Again, Winchester '73, The Man Who Shot Liberty Valance, How the West Was Won, and Shenandoah) and Biopics (including The Glenn Miller Story and The Spirit of St. Louis).

Stewart is also notable for making multiple collaborations with several famous directors from the era, such as Frank Capra, Alfred Hitchcock, John Ford, and Anthony Mann. A mark of his image as an everyman was his constantly being referred to by the public (and on this wiki) as "Jimmy Stewart", despite the fact that he was never credited as such in any of his famous film roles, always going by "James". (He, in fact, hated being referred to by the nickname.)

He fought as a pilot and squadron commander in the Second World War and flew once as a non-duty observer in a B-52 on a bombing mission during The Vietnam War (eventually promoted to the rank of Major General in the Air Force Reserve, starting from private), and was famous for being a Nice Guy, both in his film roles and in real life.

A native Pennsylvanian, Stewart had a very unusual accent that is hard to describe (a sort of whiny warble/drawl), and a stumbling delivery that is very tempting to imitate. But hey, audiences ate it up. So did women, apparently, as Stewart was known as something of a ladies' man early in his life, but stopped after he entered a very loving 45-year marriage with model Gloria McLean. He was also very good friends with Henry Fonda, another famous actor from the era and his former roommate.

Also known for reading poems he wrote about his dog on talk shows in his later years.

Stewart's final film performance was as Sheriff Wylie Burp in An American Tail: Fievel Goes West, in 1991. His wife Gloria died in 1994 and by all acocounts Stewart was "lost at sea" after losing her; he died of a pulmonary embolism-induced heart attack three years later.