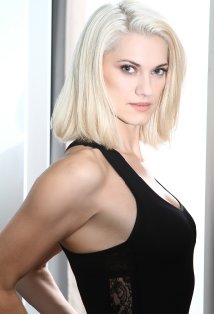 Born on February 12, 1980 in Winnipeg, Manitoba, Heather Doerksen is a Canadian actress and Voice Actor. She has gained a reputation for working in the science fiction and horror genres, with TV roles on such shows as Battlestar Galactica (2003), Fringe, and Reaper. She has carried this into film, featuring in The Eye, The Day the Earth Stood Still (2008), The Cabin in the Woods, and Pacific Rim.
Advertisement:

Now residing in Vancouver, British Columbia, Heather has been involved with a number of animation and video game productions in the city, voicing a number of characters, in addition to various radio productions.