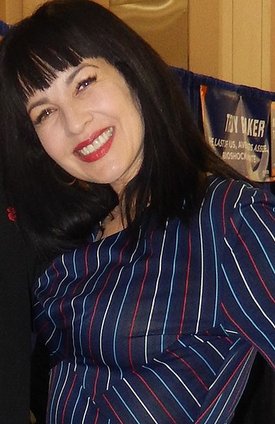 She has been cast as evil teenage girls (Vicky, Sally Avril), sweet kids (Lizzie, Emily Elizabeth, Wubbzy), villains (Azula, Jacqueline Natla, Femme Fatale) and heroines (Kimiko Tohomiko, Daphne Blake, Kitty Katswell). She's also been heard as Betsy from Curious George, Lady Redundant Woman from WordGirl, Ginger from The Tom and Jerry Show (2014), Black Canary from Batman: The Brave and the Bold, Portia Gibbons from The Mighty B!, Flicker from Handy Manny, Ms. Marvel and Amora the Enchantress from The Super Hero Squad Show, Brianna Buttowski from Kick Buttowski: Suburban Daredevil, Dr. Rebecca Holiday from Generator Rex, Cotilla of Zevo-3, the Dark Jedi Asajj Ventress and Padme in Star Wars: Clone Wars, and various characters in MAD. After the passing of Russi Taylor in 2019, she was chosen to take over as the voice of Martin Prince and the twins Sherri and Terri.

Outside of cartoons, she's notable for Catwoman in Batman: Arkham City, Batman: Arkham Knight and Injustice: Gods Among Us and its sequel. Other roles include Escape from Monkey Island, Baldur's Gate II: Shadows of Amn, Tomb Raider: Anniversary, and several Star Wars games. She reprises her role as Ventress in a bonus level in the Force Duel mode of the PSP version of the video game The Force Unleashed and appeared in two of Blizzard's main franchise games as the Dominion Ghost Nova in Starcraft II and as the female wizard in Diablo III (and reprised both roles in Heroes of the Storm, the latter re-christened as Li-Ming.).

Like Kath Soucie, she also has talent with accents as seen on Mighty Magiswords, Wolverine and the X-Men (2009) and The Mummy: The Animated Series (British); Batman: The Brave and the Bold, Carmen Got Expelled!, and My Gym Partner's a Monkey (Hispanic); And Foster's Home for Imaginary Friends (Hungarian). She's even spoken a bit of Japanese and German as Yumi on Hi Hi Puffy AmiYumi.

Tropes related to her performances:

Example of:
Monochrome Past