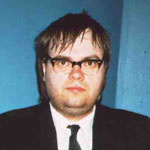 Gary, Gary... You Need to Get Laid.
Advertisement:

Gary Brecher, a.k.a. "The War Nerd"... loves war. He really does. If he could grab an M4 and a can of gasoline, and bring wrath to all you hypocritical bastards, then he would. He is the War Nerd, and never forget that fact.

Controversial, politically incorrect and surprisingly insightful, Brecher's column expounds on the nature of warfare today. Unfortunately, he hasn't released any new articles since 2009/early 2010, and the closing of the Exile — not to mention speculation that he has died — means he likely never will.

Rumors of The Exile's

death have been greatly exaggerated.