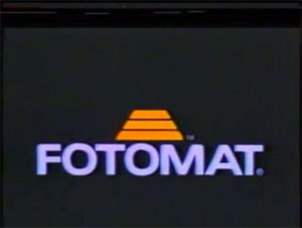 However you choose to see the company, Fotomat was a legend of its time.

This article, though, is about its videocassette division.

In mid-1979, Fotomat entered into an agreement with Paramount to rent and sell 36 feature films on videocassette. Among the first to be offered through Fotomat were Saturday Night Fever, The Godfather, and The Godfather Part II. For six months, the new venture, a partnership with Chicago-based Bell & Howell Video Systems, was tested out at the Fotomat booths in Los Angeles. It wasn't until December 1979 that Fotomacs and Fotomates nationwide would get to offer their customers anything from the catalog, by then expanded to 132 titles (a full list of which can be found here

◊). In 1980, Fotomat entered into a rental arrangement with Disney for ten feature films and three episodes of Disney's anthology series, kicking off the distribution of Walt Disney Home Video. Bell & Howell would duplicate the Fotomat catalog for the entire run until the video service stopped in 1982.

Fotomat's manufacture-on-demand approach involved customers calling a toll-free number belonging to the company, then the video would be there the next day. Rentals were cheap, at $12 a rental; however, sales were often between $40 and $70. The tapes were packaged in simple die-cut silver cases with black markings and the Fotomat logo on the case. The labels were black with white text.