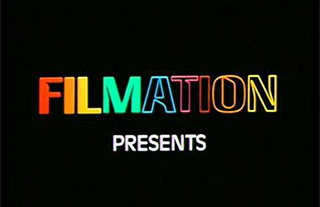 By the Power of Stock Footage!
Advertisement:

Filmation was an American animation studio founded in 1963 by Lou Scheimer and Norm Prescott that, along with Hanna-Barbera, dominated the American Saturday morning cartoon market throughout the 1960s, '70s, and '80s, particularly in the genre of action-adventure cartoons.

The studio was run on a shoestring budget, so they had to limit costs wherever possible. This condition was aggravated by Filmation's "people before art" policies which forbade the company from outsourcing jobs to cheaper foreign animation studios, known in those days as "runaway production."note Although they did work with TMS on Zorro. However, Zorro was even cheaper to produce than TMS's own domestic productions, and TMS paid their staff members more than Filmation did—to put that in perspective, a typical episode of an American cartoon usually has around 3 times ($300,000) the budget of a typical episode of an anime ($123,000)—showing just how cheap Filmation was. The only thing saving the American studio was the favourable yen-to-dollar exchange rate at the time; once that changed, they decided to just do the rest of their shows themselves. Scheimer later regretted sending the work overseas because it also upset several people in the company (And soon after, the union itself), some of who quit over the issue This resulted in Filmation's (in)famous cost-cutting techniques: Limited Animation and considerable reliance on re-used footage.

Moreover, Lou Scheimer's social conscience led him to submit the studio's productions to the oversight of various Moral Guardians, resulting in the avoidance of any controversial or challenging aspects in its series and in the various And Knowing Is Half the Battle lectures appended to episodes in the 1970s and '80s. On the plus side, Filmation did employ many of the best animation writers of the 1970s and '80s, and its artwork (as opposed to animation) featured graceful and gutsy character designs and impressive, intricate backgrounds—though the company characteristically exploited the latter by interrupting many episodes with long slow background pans featuring no animation at all.

When first established, the company started working on a series started over at a different company, Rod Rocket. As soon as production ended, the company busied themselves with commercial work for companies like Gillette, Marathon Oil and Ford. As well as film titles such as the MST3K-mocked Hercules and the Captive Women and several Italian imports subcontracted from optical effects house The Westheimer Company. They also attempted to start production of Journey Back to Oz around this time, but monetary issues made the film fall into Development Hell until the early 1970s.

The studio's first real success came in 1966 with The New Adventures of Superman; this was soon eclipsed by the runaway popularity of The Archie Show in 1968. Archie spun off Filmation's next hit, Sabrina and The Groovie Goolies, in 1971. In 1972 a bizarre crossover film was made for The ABC Saturday Superstar Movies featuring the Groovie Goolies meeting various Looney Tunes characters. The studio's first foray into socially conscious cartooning came in 1972 with Fat Albert and the Cosby Kids; thereafter, didacticism would be common not only on cartoons like Mission: Magic! (a precursor to The Magic School Bus in featuring a supernaturally endowed teacher, Miss Tickle, along with later 1980s pop idol Rick Springfield), but in Filmation's live-action productions as well, such as the environmentally educational Ark II, Shazam! (1974) and Isis (which featured another magical, Hot Librarian-ish teacher, who transformed into the Egyptian goddess ["O mighty Isis!"] in order to fly around in a skimpy skirt and demonstrate social lessons into the bargain).

In 1981, Filmation sought to tap into the increasingly popular fantasy market with Blackstar, its analogue to Ruby-Spears' Thundarr the Barbarian (characteristically, the studio had planned to make the hero a black astronaut, but CBS insisted on appealing to a different demographic, so Blackstar became a deeply tanned white man). In 1983, Filmation achieved its greatest success with He-Man and the Masters of the Universe (1983), a daily syndicated series based on a wildly popular line of toys from Mattel. This was quickly followed by a gender-flipped spin-off, She-Ra: Princess of Power. Bravestarr and Tarzan and the Super 7 were other entries in the studio's action-adventure line. These series were a favorite target of consumer advocates in the Eighties, being often characterized as nothing more than 30-minute toy commercials.

Filmation owned the rights to a 1975 live-action series called The Ghost Busters starring F Troop co-stars Forrest Tucker and Larry Storch (one of Filmation's favorite voice actors), and a guy in a gorilla suit. Columbia Pictures had to apply for the rights to call its 1984 movie Ghostbusters, and after its success, Filmation revived the series in animated format, now called simply Ghostbusters. The Spin-Off animated show from the movie thus became The Real Ghostbusters, while Filmation's version was for a while named The Original Ghostbusters.

shared among most Westinghouse broadcasting assets), but was bought by the L'Oreal Corporation in 1987 and promptly shut down; L'Oreal was only interested in Filmation's massive library of shows and was uninterested in producing any new series. Its last production to be released was the theatrical feature Happily Ever After, an unofficial sequel to Disney's Snow White and the Seven Dwarfs (featuring seven "dwarfelles" in place of dwarfs), six years after the studio was killed.note Their last production to be released while the studio was still in business was Pinocchio and the Emperor of the Night in 1987, a similar attempt by Filmation to ape Disney. Attempts by founder Lou Scheimer to re-animate the studio proved unsuccessful; Scheimer died in 2013. Most of the studio's library is currently owned by NBCUniversal, on behalf of DreamWorks Animation. A retrospective co-written by Scheimer in 2012 entitled "Creating the Filmation Generation" was released* and is where some of the information on this and the related pages come from.

Series Created by Filmation Include:

Animated Features Created by Filmation Include:

Tropes Associated With Filmation Shows Include: