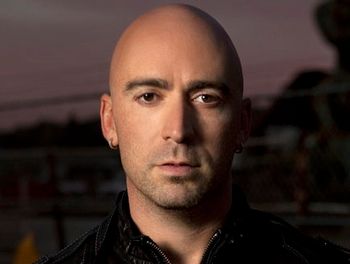 Out of the mist there came a creature
Made by the man who sowed
Devilish seeds into the soil
Of his achin' soul
Advertisement:

Edward Joel Kowalczyk (born July 16, 1971) is an American singer, songwriter, and musician who's mostly known as the lead singer of the band Live. After his toxic split from the band in 2009, he focused on a solo career of mostly Christian music. This page is for his career as a solo artist. Keep in mind that he performs any and all of his old songs from when he was with Live, so song-tropes from that era still apply to him. He rejoined Live in December 2016.