Creator / EC Comics
aka: Tales From The Crypt 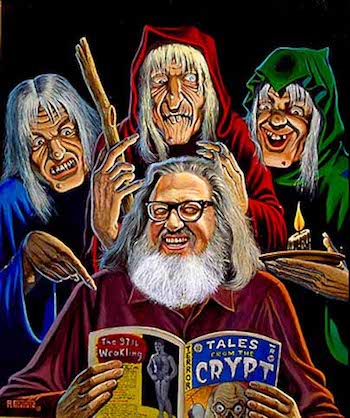 EC Comics' publisher William Gaines, flanked by the Crypt Keeper, the Old Witch, and the Vault Keeper.
"You should know this about our horror books. We have no ghosts, devils, goblins, or the like. We tolerate vampires and werewolves, if they follow tradition and behave the way respectable vampires and werewolves should. We love walking corpse stories. We’ll accept the occasional zombie or mummy. And we relish the tales of sadism. Virtue doesn’t always have to triumph."
—"EC Comics Horror Guidelines", from a 1950s Help Wanted ad
Advertisement:
"We try to entertain and educate. That's all there is to it. A lot of people have the idea that we're a bunch of monsters who sit around drooling and dreaming up horror and filth. That's not true, as you can see."
—Bill Gaines, really trying to walk back that Help Wanted ad, as quoted in "Depravity for Children — 10 Cents a Copy!" (The Hartford Courant, Feb. 14, 1954)

EC Comics was founded by Maxwell Gaines in 1944 as "Educational Comics", with the aim of producing fact-based comic books marketed at churches and schools. After his death in 1947, his son William M. Gaines inherited the business, re-branding it as "Entertaining Comics" and producing titles in more typical commercially-oriented genres: Western, Crime Fiction, romance. Then, beginning in 1949, the younger Gaines started introducing the "New Trend" series, with titles focusing on Horror (Tales from the Crypt, The Vault of Horror, The Haunt of Fear), crime (Crime SuspenStories), realistically depicted war (Two-Fisted Tales, Frontline Combat), Science Fiction (Weird Science, Weird Fantasy), or a mixture of the above (Shock SuspenStories). The horror, science fiction, and crime stories almost invariably featured Twist Endings, and EC was making extensive use of the Karmic Twist Ending before The Twilight Zone (1959) ever aired. (They stayed clear of the Cruel Twist Ending.)

A combination of evocative (if sensationalistic and florid) writing and excellent art by some of the top comic book artists of the time, combined with outreach to the fans, quickly caused EC's sales to skyrocket. In addition to a strong theme of often gruesome poetic justice, EC's titles often tackled social issues of the day, especially in their science fiction and suspense books.

At its height its roster included the legendary Harvey Kurtzman, Al Feldstein, Wally Wood, Bernard Krigstein, Bill Elder, Jack Davis, and several other legendary talents who revolutionized the history of comics. The style of EC Comics, with its personalized editorials created a sense of give and take between readers and creators that would later be imitated by the Marvel Bullpen. EC was also groundbreaking for featuring profiles of some of its creators in its pages and for its broad range of subject matter which made it perhaps the only major comics publishing imprint with a regular adult audience. They benefited greatly from the post-war climate which saw superheroes displaced in popularity. Put simply, the struggle for Alternative Comics to justify their existence in a market dominated by superheroes did not exist then. This allowed them to tackle a range of subjects and ideas with a freshness not seen in comics at that time and rarely afterwards.

EC was not shy about "borrowing" ideas from prose stories and were caught at it by Ray Bradbury, but they were able to negotiate a settlement, and published several fine and very faithful authorized adaptations of his work.

This was also the birthplace of a little comic book called Tales Calculated to Drive You MAD, a satire and comedy title. Its first issues sold poorly, but it soon found enough of a following to inspire a number of imitators, including one published by EC itself (Panic).

But it was too good to last. A groundswell of outrage from the Moral Guardians of the mid-1950s led to a Congressional investigation of possible ties between comic books and juvenile delinquency. To protect themselves from possible government censorship, the comic book publishers established The Comics Code in 1954, resulting in comics being forbidden to have sexual content, racial content, drugs and alcohol (unless it's for educational purposes) and graphic violence in them. William Gaines, although he'd initially been in favor of the idea, felt the code adopted was far too restrictive and gave the Code authorities too much opportunity for Executive Meddling.

After distributors refused to carry comic books without the Comics Code Authority stamp, Gaines reluctantly signed EC up to the service. This required canceling several series, some of them the company's best sellers, as the magazines' very titles violated the Code. Despite a valiant attempt at a "New Direction" focusing more on social realism than horror, EC remained blacklisted by many newsdealers, and found itself too frequently clashing with the CCA executives. Gaines tried to carry on the tradition of adult-oriented stories with the Picto-Fiction magazines, but they didn't sell.

Notoriously, EC was told by the CCA to change the ethnicity of a character in a reprint of the classic Does This Remind You of Anything? story "Judgment Day"

, on what was blatantly racist grounds. This was the last straw, and the story was reprinted unchanged in the final comic book published by the company.

The black-and-white MAD, which had switched from the color-comic medium in 1955 for reasons unrelated to the Code, ultimately became the sole surviving EC publication and went on to decades of success as a satirical/parodical magazine for children, adolescents, and proudly immature adults. But the influence of EC has continued through multiple reprints, homages by subsequent horror and SF writers, a pair of early-'70s British feature films titled Tales from the Crypt and Vault of Horror, and the television series Tales from the Crypt.

Despite this, EC Comics wasn't forgotten by its readership who sustained its influence through a cult like devotion. Many of them, indeed became underground comics artists as well as original talents who later worked on mainstream comics bringing the EC influence with them, among them Robert Crumb, Frank Miller, Neil Gaiman, Art Spiegelman and Alan Moore to name a few. Indeed this cultlike popularity played a role in the development of comics fandom and today EC endures as one of the greatest contribution to the comics industry.

Not to be confused with DC Comics, although their properties are now both owned by Warner Bros..

Comics Published By The Company:

Tropes associated with EC Comics include:

Alternative Title(s): Tales From The Crypt