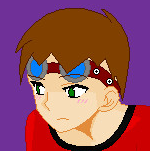 Cory in his new glory...

Cory is another fan-fiction writer that is trying to get himself known in the Fandom. He mostly specifics himself with writing original stories ever since the first grade, but he didn't get his start in fan-fiction until a little later in his life. By the time he hit high-school, his career as a writer began with his first story, Ed, Edd 'n Eddy: Deadlocked

, which got him into the world of fan-fiction.

His experience with writing fan-fiction began back during his elementary years by starting off with a Captain Underpants comic as written by George and Harold, before dropping it and then returning back to the world through an one-shot that will lead to one of Cory's other works. His real break came with the release of Deadlocked, which is then followed by Kingdom Hearts before expanding to what is now known as The Ed, Edd n Eddy Project.

He has been noted to be one of the few fan-fiction writers to constantly update a story at such a young age.

He is also a troper on this site as well...

Some websites Cory works with: