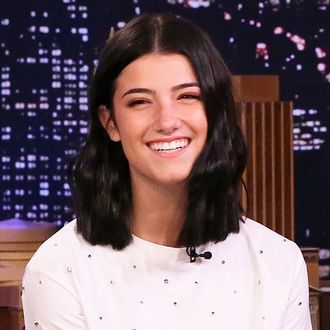 Charli D'Amelio (born May 1, 2004) is an American dancer, vlogger and social media personality. She was a competitive dancer for over 10 years before starting her social media career.

In May 2019, D'Amelio posted her first TikTok where she lip-synced with a friend. July 2019 saw her videos begin to gain more traction with the first one being a video of her doing a 'duet'. She gained further exposure for her dance video to K Camp's song, Lottery which was dubbed the 'Renegade' dance. In November 2019, D'Amelio joined the collaborative TikTok house, The Hype House along with her older sister, Dixie. She was also asked to perform as a dancer for the singer, Bebe Rexha during her opening performance for The Jonas Brothers. In the same year, D'Amelio began her vlogging channel on YouTube.

Despite her young age and her relatively short time in the spotlight, D'Amelio has been subject to criticism that some could see as unwarranted. She has openly stated she has suffered with an eating disorder which can be further exaserbated by her public exposure. In 2020, D'Amelio along with her family and fellow YouTube creator, James Charles made a video for their series, Dinner With The D'Amelios. In the video, the sisters and Charles were seen eating a paella made by the family's personal chef. Social media users were quick to criticise both sisters of being rude.