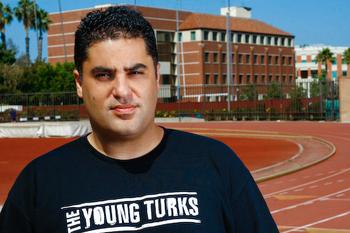 A rising political commentator/pundit and analyzer, the Turkish-American Cenk Kadir Uygur (born March 21, 1970) is the main host and creator of The Young Turks on YouTube, who wanted to start a liberal political and entertainment show. Born in Istanbul, his Muslim family emigrated to New Jersey when he was eight, but he switched from Muslim to agnostic later in his life, and he worked as an assistant attorney after graduating from Pennsylvania University. Starting off as a Northeast moderate Republican, Cenk subsequently switched into a liberal/progressive, but he says he retains most of his old stances. His most defining view is that multinational corporations have bribed Congress, manipulating the political system through the media and think tanks in order to shift the spectrum further right-wing, while making money off the backs of the middle and working class. Unsurprisingly, he is not a fan of such an endeavor.

By and large he views both the Democrats and Republicans as jointly-owned subsidiaries of those same multinational corporations, Cenk essentially views the Democrats as Dirty Cowards and believes they are capitulating to this process, but he gives credit where it's due. He holds a particular soft spot in that towards Alan Grayson, Russ Feingold, Anthony Wiener and Bill Clinton, though he still gives Clinton flak for allegedly contributing to the economic recession and allowing corporate control of the media. His view on the Republicans is even harsher, but he still has a soft spot for old-school Republicans like Alan Simpson, who he believes are dead wrong on the policies, but right on the issues. He also believes that the mainstream media deliberately leads to an unwillingness to genuinely and forcefully challenge orthodox political positions and conventional wisdom. He has also argued that modern American political journalism fails to meet its obligation of reporting on the news in an objective manner, preferring a neutral approach to news stories, so as not to be accused of taking sides, even when there's already a clear distinction between fact and fiction.

To say that he disliked George W. Bush's administration would be a massive understatement. He viewed Bush as a Tyrant Takes the Helm type, with Vice President Cheney as the Man Behind the Man. Although Cenk was initially positive of Barack Obama, he quickly took an increasingly critical attitude towards Obama's policies, believing the policies and initiatives of Obama's administration were shifting further to the right and that Obama made unnecessary and preemptive tangible and ideological concessions to his opponents. On October 21, 2010, he became an official contributor and substitute anchor to MSNBC, filling in for Dylan Ratigan and Ed Schultz, among others. On January 21 of the following year, Cenk hosted his own segment on the 6 p.m. Eastern slot for MSNBC, after Keith Olbermann parted ways with the network. He earned immense ratings, enough that MSNBC beat CNN and Fox News by June, but his contract with MSNBC ended after he turned down an offer that involved more money, but less prominence. According to Cenk, the head of MSNBC told him "people in Washington were concerned about your tone".

Cenk is now running a campaign for Congress in California's 25th District, representing Santa Clarita, Lancaster, Palmdale and parts of Simi Valley. He is one of the top contenders in the race, competing with Democrat Christy Smith and Republicans Mike Garcia and Steve Knight. After Katie Hill (the previous representative from the district) resigned, he is running two campaigns at once - one to complete her term in the 116th congress and one to succeed her as a member of the 117th congress.

Tropes related to Cenk Uygur include: