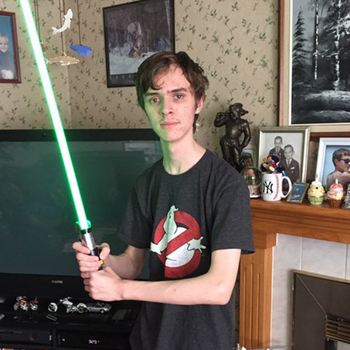 is an actor, director, writer, and a film critic who reviews various new and old movies every week on his YouTube channel. He wanted to make movie reviews because he was inspired by Chris Stuckmann and his reviews. Pettis rates the movies he reviews on a scale from A+ to F. A+ being the highest rating, and F being the worst rating. In 2014, Pettis created alongside Nicholas Favel, his own web comedy talk show series entitled Falconcast. Pettis was scheduled to write, direct, and star in the superhero fan film, Batman Unveiled. The film was announced as cancelled in December 2017.

He is scheduled to direct and star in the upcoming horror film Omnicron.

Caillou and his channel incorporate the following tropes:

"Thank you guys so much for watching my new movie review, and if you liked this video, make sure to click the red subscribe button down below to become a falcon."