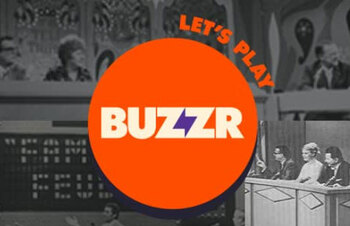 Buzzr is an American channel owned by Fremantle Media that shows classic game shows from the Fremantle library. The network launched in 2015, and is available via OTA broadcasting (typically carried as a subchannel of Fox-owned stations), cable and satellite TV, and on streaming services like Pluto TV, Stirr, and Plex.
Advertisement:

The network, to put things concisely, is Fremantle’s answer to Game Show Network. Given the latter's Network Decay as of late, one might compare Buzzr to GSN in its prime - nothing but game shows (save for the occasional E/I programming and oddity now and then). Given Fremantle's vast array of game shows, expect a plethora of familiar (and even, at times unfamiliar) names to show up on the schedule.

Can be watched via over-the-air broadcast, free online via its website

, and on Pluto TV and STIRR.

Former Programming:note Due to Fremantle owning both Buzzr and most of these shows, they can simply be considered being cycled out, rather than having their rights expire like other networks.