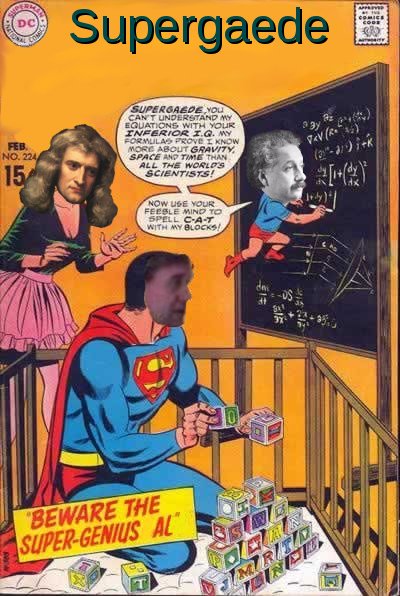 Bill Gaede is a crank scientist who believes that light is neither a wave nor a particle, but a double helix. Because of this he made some amusing videos on youtube

and an amusing site

full of rant and Photoshop images. He also wrote a book called "Why god doesn't exist" because his initial plan was to explain this using physics before it became an alternative physics book.

Due to certain issues, he dismisses Albert Einstein's relativity theory, quantum physics and a host of other theories. To him, objects are 3D, space non-dimensional (as objects are already 3D) and time a number line, just like one would number frames in a movie file.

Why it has to be a double helix and not a single helix or a (Sure, Let's Go with That) triple helix is not clear. It's also pretty unclear why every atom needs to have two threads for every other atom in the universe and how a light signal is sent, but is clear that the pitch of the helix is the same as the wavelength of a photon.

Since light is like a thread and electrons are known to absorb light, everything is supposed to made of electro-magnetic threads. The electron shell then looks like a ball of yarn with a nucleus in its center, which is connected to the electron shell with yet again, threads.This makes the atom look more like a plasma lamp instead of a cloud of random surrounding a couple of billiard balls. But since the threads connecting the nucleus and shell are for whatever reason straight lines, perhaps a better example is thinking of a bicycle wheel as a cross-cut.

Since the universe is all thread, gravity is explained as a tension. Gaede has not provided an explanation for the eccentricity of planets as of yet. Magnetism is explained by the helices loosening up, playing jump-rope and clashing against each other. Photon emission is explained by a mechanism called pumping, inflating and deflating the shell. How and why objects become (un)obstructive is still a big mystery to this theory.

Gaede also believes that the human species will die out soon, that all significant inventions have already been invented, homosexuals have more counter-clockwise helices in their brains than heterosexuals. and is 100% certain that the existence of any god is irrational.

He has a son, Eric Gaede, who also got some fame for his web videos, most of all Reviewing a Reviewer.