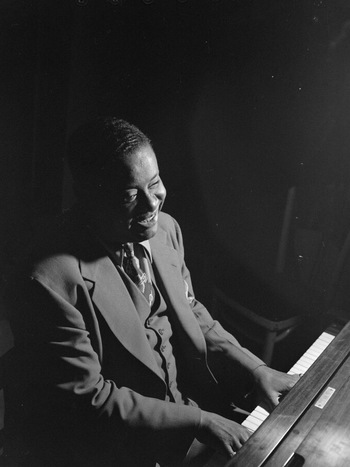 "I only play the piano, but tonight God is in the house."
—Fats Waller

Born and raised in Toledo, Ohio, Tatum was a largely self-taught Child Prodigy, and legally blind for most of his life. He developed a technique of stride style with lightning-fast cadenzas, runs, and flourishes that are still awe-inspiring today.

He was regarded with awe by his contemporaries, including jazz greats such as Charlie Parker, Oscar Peterson, Dave Brubeck, Teddy Wilson, and classical pianists including Vladimir Horowitz, Arthur Rubinstein, and Sergei Rachmaninoff.

His music was featured in the TV series Everwood, and he was portrayed briefly by Johnny O'Neill in the movie Ray. He was also a major influence on Johnny Costa, the accompanist for Mister Rogers' Neighborhood, on whom he bestowed the nickname "the white Tatum."