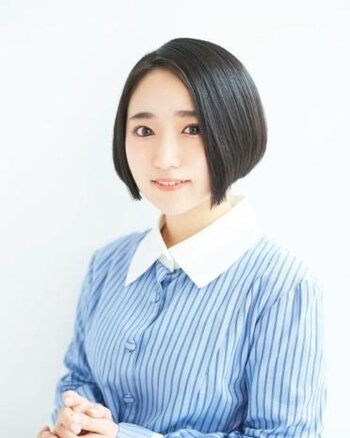 Real name: Aoi Yabusaki (born March 27, 1992). Under her famous Stage Name "Aoi Yūki", her voice has been used for a wide range of characters, though mostly for young (or young-looking) girls thus far, as well as Emotionless Girls and her Magical Girl roles, which tend to wind up in what you will least expect.

May be One of Us; she has a penchant for Elegant Gothic Lolita fashions, draws some decent Fan Art, and occasionally drops in some 2Chan slang (also may be a Yaoi Fangirl if her hilarious antics at the BuruRaji W Riot Summer Again special are to be believed, mainly teasing Hazama's and Azrael's seiyu by pairing them to the point that her Fan Nickname is Y.Aoi). On the yuri side of things, she's mentioned an infatuation with Madoka Magica's Kyoko several times, declaring the character to be her "waifu". She is also apparently famous for being a real life Token Mini-Moe, with a height of only 145 cm (or 4'9"). Also, all thanks to Puella Magi Madoka Magica, she could enter some relationship with Chiwa Saito. She also has a relationship with Nao Tōyama, being in almost all of the series the other has been in so far. With the opposite gender, she has starred in more than a few shows with fellow up-and-coming seiyuu Yuki Kaji.

When she was 11 years old, she starred on the TV show Gaki no Tsukai ya Arahende, a role as a very young gangster leader girl

, who abuses her men like no other. Bet you wouldn't expect that coming from her who's more known for her cute, 'little sister' or 'waifu'-material characters. This is rather similar to what happened with fellow voice actress Yūko Gotō.

In May 2013, she formed a duet with Ayana Taketatsu called Petit Milady.

She's also the winner of the 6th seiyuu annual awards

She can sound quite hot-blooded when put in voice roles that require it which you may not expect from such an adorable voice. She also draws relatively well.

From 2017-2019 she voiced a lot of characters with unclear gender identities such as Boogiepop, Borr, Kino, Tanya and Tsugumi.

Aoi Yuuki's description's great finish! Yep, my fingers are all fine! I can still keep typing--

*Fingore'd*
Don't worry. Everything is fine.