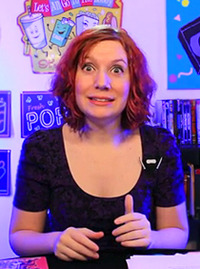 "Y'know, somehow I imagined the big Warlock vs. Warlock battle to be a little more impressive than 'Two guys fight with a stick in a sewing room.'"
— Witchcraft 3: The Kiss of Death
Advertisement:

Allison Pregler (born December 6, 1989) is a reviewer who takes on Z-grade movies, usually in the horror or martial arts genre; a roughly similar beat to The Cinema Snob, but tending towards dumb action flicks and a morbid enjoyment of them. She began reviewing in late 2009 and after gaining some notoriety on their forums (under her old handle, Obscurus Lupa), she became a member of the Channel Awesome family. She remained on the site until early 2015, when Obscurus Lupa Presents was retooled into Movie Nights.

She also currently runs two podcasts through her channel, both covering the Charmed franchise and both co-hosted with Phelous.

After a controversial departure from Channel Awesome, Allison officially announced

on January 20th, 2015, that she'd be revamping OLP into an impromptu review show called Movie Nights, with an appropriately-shlocky elevator jazz theme

Her videos can be seen here

Can't get enough Allison? You can see her kicking ass as Interpol ninja Cheetah Lee in Ninja the Mission Force. She also appeared in Brad Jones' movie Jesus, Bro! and frequently guest-starred on his series Midnight Screenings, typically reviewing terrible childrens' films or RiffTrax live shows, as well as the occasional adult comedy (including, of course, Baywatch (2017)).