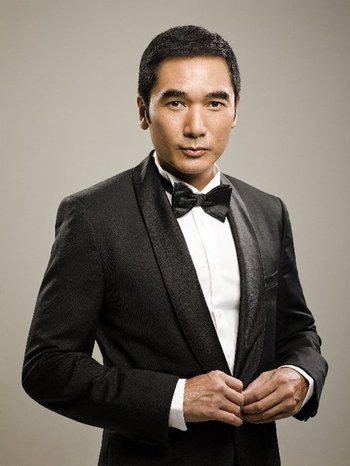 He can kick so much ass because his enemies are too distracted by his handsomeness.
Advertisement:

Ever since Alex's graduation from Macao's Yuet Wah College, his career began as a model, until his film debut in 1986 in "Escape From Coral Sea". His role as Commander Fong in the Girls with Guns classic Iron Angels trilogy makes him a popular name among 90s B-grade action film enthusiasts, where he's proven to be versatile both as a hero and a villain.

Fong has been a representative of DOXA, a Macao-based series of watches ever since 2008.

As of 2020, Alex Fong has starred in over 120 films, numerous TVB Dramas, and isn't showing any signs of stopping just yet.

Tropes Associated With This Performer