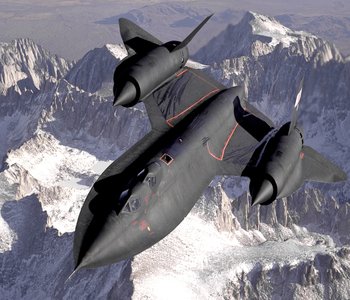 Though I travel through the Valley of Shadow and Death, I will fear no evil, for I am at 80,000 feet and climbing...

Flight has always fascinated humanity. So it's no surprise that, when powered-flying machines were invented at last in 1903, they were considered to be cool. As aircraft became more commonplace over the decades, though, only the most awesome among them ascended to true Cool Plane glory. Despite this, Real Life aviation has produced more examples of the Cool Plane than many fiction works put together - so much so that a lot of writers are satisfied to just use Real Life planes in their works without having to imagine their own.

It should also be noted that all real life aircraft have both flaws and limits. What is ok with one might be fatal with another.

Listed below, in approximate order of the era in which they went into production note  World War II has so many of these, however, that we've separated the time era into three folders , or would have gone into production had their development not been halted, for whatever reason,note with a few years leeway for models bordering eras, are the some of the most awesome flying machines from reality (along with, where possible, their notable appearances in fiction). Enjoy.

open/close all folders
The Dawn of Flight
The Dawn of Aerial Warfare (World War One)
Between the World Wars
World War Two: General

During WWII both sides operated a variety of light utility aircraft.

The planes themselves were fairly simple and generic but also very versatile. Some, like the German Fieseler Fi 156,

were purpose built while others, like the American L-4 Grasshopper (aka, a Piper J-3 Cub

Their STOL capabilities and ability to operate in very primitive conditions meant they were used for a bit of almost everything: artillery spotting, observation, reconnaissance, airborne ambulance, courier service, VIP transport, light cargo transport, pilot training, target tug, close air support, and even tank busting. That last one might seem a bit unusual but the Americans figured out how to add improvised racks of bazookas to their liason aircraft. One of the L-4s armed with bazookas destroyed six German tanks (two of which were Tigers) and several armoured cars. Similarly, modified civilian aircraft such as the single-engined Stinson Voyager

or the twin-engined Grumman Widgeon

carried out anti-sub patrols flying the banner of the Civil Air Patrol, with civilians operating as military auxiliaries. These civilian planes are credited with spotting 173 German subs, engaging 57 of them with bombs or depth charges, and reporting 91 merchant ships in distress.

As experimental craft, these didn't go into mass production nor were ever designed to do so, but to deny their coolness and contributions to humanity's knowledge of aviation would be a crime.

Go back to the Cool Plane, before someone else flies off with it.