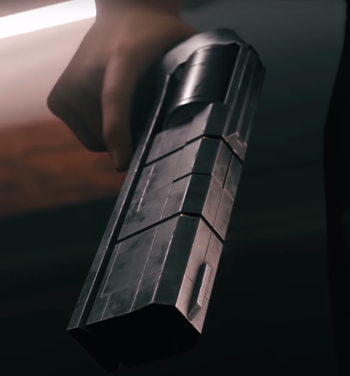 "Come out of that Russian roulette a winner, and you... you're it.
Valentin Dmitrovich Zukovsky: Walther PPK, 7.65 millimeter. Only three men I know use such a gun. I believe I've killed two of them.
James Bond: Lucky me.
— GoldenEye
Advertisement:

Political definitions aside, handguns are commonly defined as guns that are held in one hand. They are some of the first type of guns ever invented, in the form of literal hand cannons — cannons shrunk down to hand size. Yes, revolvers are handguns too, but this page specifically focuses on pistols.

The use of the term "pistols" as a synonym for "handguns" is a bit of an issue of Insistent Terminology. These two terms are interchangeable in daily use, but most technical experts would make a distinction between the two terms, categorizing pistols as as subset of handguns with one chamber, distinguishing them from revolvers who have revolving cylinders containing multiple chambers.

Back to Cool Guns.