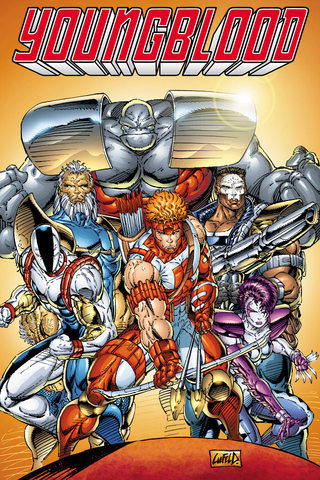 Youngblood is an early Image Comics comic book written by Rob Liefeld, based on a team he had created at the start of his career and planned to do as part of Gary Carlson's anthology series Megaton in the late 1980s, but put on hold when he got job offers from both Marvel and DC at the same convention. When he revived the concept in the early 1990s, he mixed in some ideas he had for the Teen Titans but never got to use, about a superhero team funded by the government to do their work, while in their spare time they licence their image and brand to toy and clothing companies. Interestingly it was the first book published under the Image banner, but its first issue was completed in 1991 before Image was officially formed. It was later rebooted by Alan Moore in Youngblood: Judgment Day, which is generally regarded as an improvement.

While no individual Youngblood series has been particularly long-running (the longest lasted 22 issues), the property has never stayed dormant for long. There's been several relaunches, spinoffs and crossovers over the years as well as its characters making frequent appearances as part of the superhero community in other Image publications such as Invincible, and Image United. A 2008 relaunch written by Joe Casey elevated the series to levels of adequacy. Unfortunately, this only lasted nine issues.

A new relaunch of the series began in 2012, published by Image comics, along with Glory, Erik Larsen's run on Supreme, and Bloodstrike. None lasted very long, and only Glory made a lasting impact.

Another relaunch began in May 2017, to coincide with the 25th Anniversary of both Image and the original Youngblood #1. Written by Chad Bowers with art by Jim Towe, it has Shaft leading a new Youngblood team consisting of a new Vogue, Sentinel 2.0, Doc Rocket and Suprema. For tropes pertaining to that series, see here.

In 2018, the spinoff Bloodstrike was also revived, by Michel Fiffe of Copra fame.

Not to be confused with the 1986 movie of the same name, the musical The Young Blood Chronicles, or the webcomic Young Blood.